Prostate 2X can treat Benign Prostatic Hyperplasia (BPH) and high blood cholesterol (hypercholesterolemia). The two main components Beta Sitosterol (Glycine Max seed) extracts and Saw Palmetto (Serenoa repens) provide natural therapies for urinary symptoms related to BPH without any side effects from medications. These phytosterols are chemically similar in structure to cholesterol with the additional benefit of anti-inflammatory effect. Sitosterol can be used to treat heart disease and high cholesterol...

Relieve the symptoms of:

Adults: Take 4 delayed release capsules daily, 2 in the morning and 2 in the evening, or as directed by a health care practitioner.

Recommended use or purpose:

Prostate 2x is provided in the new DRcaps; which enable the active ingredients to pass through the stomach unchanged by stomach acids, and be absorbed in the small intestine. This assures maximum bioavailabity of these micronutrients.

Benign prostatic hyperplasia (BPH) is the term used to describe a non-cancerous enlargement of the prostate. The enlarged prostate may exert pressure on the urethra, resulting in difficulty urinating.

As men age, the tissue of the prostate grows and changes, resulting in enlargement (BPH). Men over the age of 40 may begin to experience the symptoms of having an enlarged prostate, and not recognize why these changes are happening, or that they can be treated. The cause of BPH (benign prostatic hyperplasia) is not known, although there are possible links to high-fat diets, family history and hormones. BPH is not cancer!

Not all men with BPH experience symptoms, but if the prostate enlargement presses on the urethra (the tube that carries urine from the bladder out of the body), it could result in: 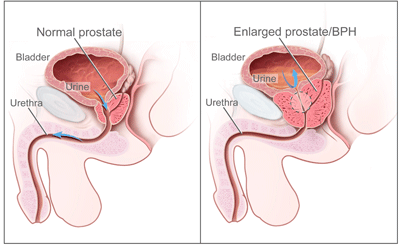 Provides a mixture of phytosterols (marketed as beta-sitosterol) are often included in natural therapies for urinary symptoms related to BPH. In a six-month study of 200 men with symptomatic BPH, 60 mg/d of a beta-sitosterol preparation improved symptom scores, increased peak urinary flow, and decreased post-void residual urine volume compared to placebo. A follow-up study reported that these improvements were maintained for up to 18 months in the 38 participants who continued beta-sitosterol treatment.

Similarly, in a six-month study of 177 men with symptomatic BPH, 130 mg/d of a different beta-sitosterol preparation improved urinary symptom scores, increased peak urinary flow, and decreased post-void residual urine volume compared to placebo. A systematic review that combined the results of these and two other controlled clinical trials found that beta-sitosterol extracts increased peak urinary flow by an average of 3.9 ml/second and decreased post-void residual volume by an average of 29 ml.

A palm like plant with berries that were a staple food and medicine for the Native Americans of the southeastern United States. In the early 1900s, men used the berries to treat urinary tract problems, and even to increase sperm production and boost libido. Today, the primary use of Saw Palmetto is to treat benign prostatic hyperplasia (BPH), a non-cancerous enlargement of the prostate gland, but it also contains plant-based phytosterols including β Sitosterol and Stigmasterol which may be effective for BPH. Researchers think that Saw Palmetto may affect the level of testosterone in the body, and perhaps reduce the amount of an enzyme that promotes the growth of prostate cells.

Within the cell membrane, cholesterol also functions in intracellular transport, cell signaling and nerve conduction. Recent studies show that cholesterol is also implicated in cell signaling processes, assisting in the formation of lipid rafts in the plasma membrane.

Within cells, cholesterol is the precursor molecule in several biochemical pathways. In the liver, cholesterol is converted to bile, which is then stored in the gallbladder. Bile contains bile salts, which solubilize fats in the digestive tract and aid in the intestinal absorption of fat molecules as well as the fat-soluble vitamins, A, D, E, and K. Cholesterol is an important precursor molecule for the synthesis of vitamin D and the steroid hormones, including the adrenal gland hormones cortisol and aldosterone, as well as the sex hormones progesterone, estrogens, testosterone and their derivaties.

On the other hand, high concentrations of functional HDL, which can remove cholesterol from cells and atheroma, offer protection and are sometimes referred to as "good cholesterol". These balances are mostly genetically determined, but can be changed by body build, medications, food choices, and other factors. Resistin, a protein secreted by fat tissue, has been shown to increase the production of LDL in human liver cells and also degrades LDL receptors in the liver. As a result, the liver is less able to clear cholesterol from the bloodstream. Resistin accelerates the accumulation of LDL in arteries, increasing the risk of heart disease. Resistin also adversely impacts the effects of statins, the main cholesterol-reducing drug used in the treatment and prevention of cardiovascular disease.

Conditions with elevated concentrations of oxidized LDL particles, especially "small dense LDL" (sdLDL) particles, are associated with atheroma formation in the walls of arteries, a condition known as atherosclerosis, which is the principal cause of coronary heart disease and other forms of cardiovascular disease. In contrast, HDL particles (especially large HDL) have been identified as a mechanism by which cholesterol and inflammatory mediators can be removed from atheroma. Increased concentrations of HDL correlate with lower rates of atheroma progressions and even regression. A 2007 study pooling data on almost 900,000 subjects in 61 cohorts demonstrated that blood total cholesterol levels have an exponential effect on cardiovascular and total mortality, with the association more pronounced in younger subjects. Still, because cardiovascular disease is relatively rare in the younger population, the impact of high cholesterol on health is still larger in older people.

Elevated levels of the lipoprotein fractions, LDL, IDL and VLDL are regarded as atherogenic (prone to cause atherosclerosis). Levels of these fractions, rather than the total cholesterol level, correlate with the extent and progress of atherosclerosis. Conversely, the total cholesterol can be within normal limits, yet be made up primarily of small LDL and small HDL particles, under which conditions atheroma growth rates would still be high. Recently, a post hoc analysis of the IDEAL and the EPIC prospective studies found an association between high levels of HDL cholesterol (adjusted for apolipoprotein A-I and apolipoprotein B) and increased risk of cardiovascular disease, casting doubt on the cardioprotective role of "good cholesterol".

PHYTOSTEROLS - HOW DO THEY WORK?

β SITOSTEROL is a plant substance similar to cholesterol. It might help reduce cholesterol levels by limiting the amount of cholesterol that is able to enter the body. It can also bind to the prostate to help reduce swelling (inflammation).

β Sitosterol is used for heart disease and high cholesterol. It is also thought to boost the immune system. Some men use β-Sitosterol for enlarged prostate (benign prostatic hyperplasia or BPH). Some women use it for symptoms of menopause.

In foods, β Sitosterol is added to some margarines that are designed for use as part of a cholesterol-lowering diet and for preventing heart disease. The Federal Food and Drug Administration (FDA) allows manufacturers to claim that foods containing plant sterol esters such as β Sitosterol and Campesterol are for reducing the risk of coronary heart disease (CHD). This rule is based on the FDA’s conclusion that plant sterol esters may reduce the risk of CHD by lowering blood cholesterol levels.

An unsaturated plant sterol occurring in the plant fats or oils of soybean, calabar bean and rape seed, and in a number of medicinal herbs. It is one of a group of plant phytosterols, that includes β Sitosterol, Campesterol and Ergosterol (provitamin D2) that are chemically similar to animal cholesterol.

A phytosterol whose chemical structure is similar to that of cholesterol. It is thought to have anti-inflammatory effects. It was demonstrated that Campesterol inhibits several pro-inflammatory and matrix degradation mediators typically involved in osteoarthritis induced cartilage degradation.

It was first shown in the 1950s that plant sterols are beneficial in lowering LDLs and cholesterol. It is thought that the Campesterol molecules compete with cholesterol and thus reduces the absorption of cholesterol in the human intestine. Plant sterols may also act directly on intestinal cells and affect transporter proteins.

Vitex introduces Prostate 2x, an advanced formula to manage the symptoms of both BPH and high cholesterol in one formula.

Most men who suffer from BPH also have elevated cholesterol and the combination of β Sitosterol extract and Saw Palmetto extract have the unique properties of providing clinically effect relief for both conditions at the same time.

Most dietary substances such as enzymes, polyphenols, amino sugars and plant sterols such as β sitosterol are severely altered by stomach acids as part of the digestive process and very little of the original active substance makes its way to the small intestine for absorption.

The new DRcaps overcome this problem by delivering the active compounds directly to the small intestine for maximum bioavailabity.

We invite you to take a look at a range of Canadian stores, other foreign distributors and online stores that are able to help you wherever you are in the world!